We are changing to Spectrum Therapeutics

Medical cannabis is about more than products.

We are a healthcare company dedicated to research and education.

We are changing to Spectrum Therapeutics

Medical cannabis is about more than products.

We are a healthcare company dedicated to research and education.

Here's an introduction to medical cannabis and its effect on the body.

Medical cannabis is produced by the flowers of the cannabis plant. The plant is found in both male and female form. The female flowers' glandular trichomes produce a special resin, which contains a high concentration of the plant's active compounds. It is the flower and this resin that is used for the manufacture of medical preparations.

More than 500 natural compounds have been identified in the cannabis plant. This includes the medically important cannabinoids, but also terpenes, flavonoids and a variety of inactive compounds.

Traditionally, cannabis was divided into the variants Sativa or Indica, but today the plants are classified according to the chemical composition of active compounds. Based on this, a large number of variants of the cannabis plant have now been identified.

The two main active compounds in medical cannabis, THC and CBD, affect different receptors, and the balance between them may be important with respect to the indication one wishes to treat.

THC activates CB1 and CB2 receptors directly, while CBD has an indirect effect and can inhibit the binding of THC to the receptor. Meanwhile, the CBD can increase the level of our own endocannabinoid, anandamide. That is why the ratio between THC and CBD in medical cannabis is essential for the clinical effect.

Common to both THC, CBD and the body's own endocannabinoids is that they are fats (lipids). Thus, they are insoluble in water but readily soluble in oil. The molecules are also relatively small and can freely pass through the blood-brain barrier.

Both 2-AG and anandamide contain the fatty acid arachidonic acid. The endocannabinoids are formed and rapidly broken down in the cell, thereby regulating the activity of the endocannabinoid system.

CB1 receptors are found primarily in the central and peripheral nervous system, but also in the gastrointestinal tract. They are particularly concentrated in the part of the brain that controls cognitive functions, appetite, sleep, learning, memory, stress, pain, motor skills and nausea. When THC and CBD affect the CB1 receptors, the signalling in the brain's neurons is modulated.

CB2 receptors are found primarily in organs and cells related to the immune system, including the tonsils, the spleen, the lymph nodes and in circulating lymphocytes and neutrophils (types of white blood cells). That's why activation of the CB2 receptor inhibits the body's inflammatory response. 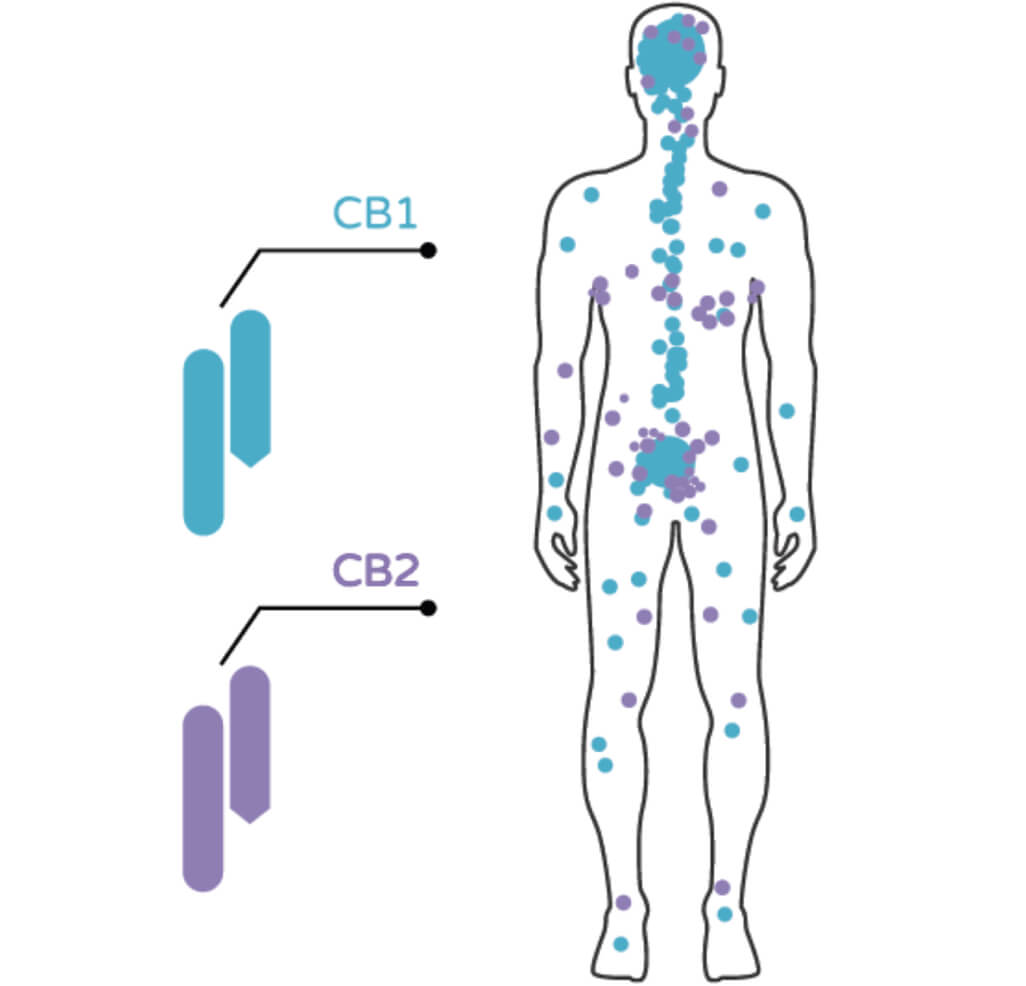 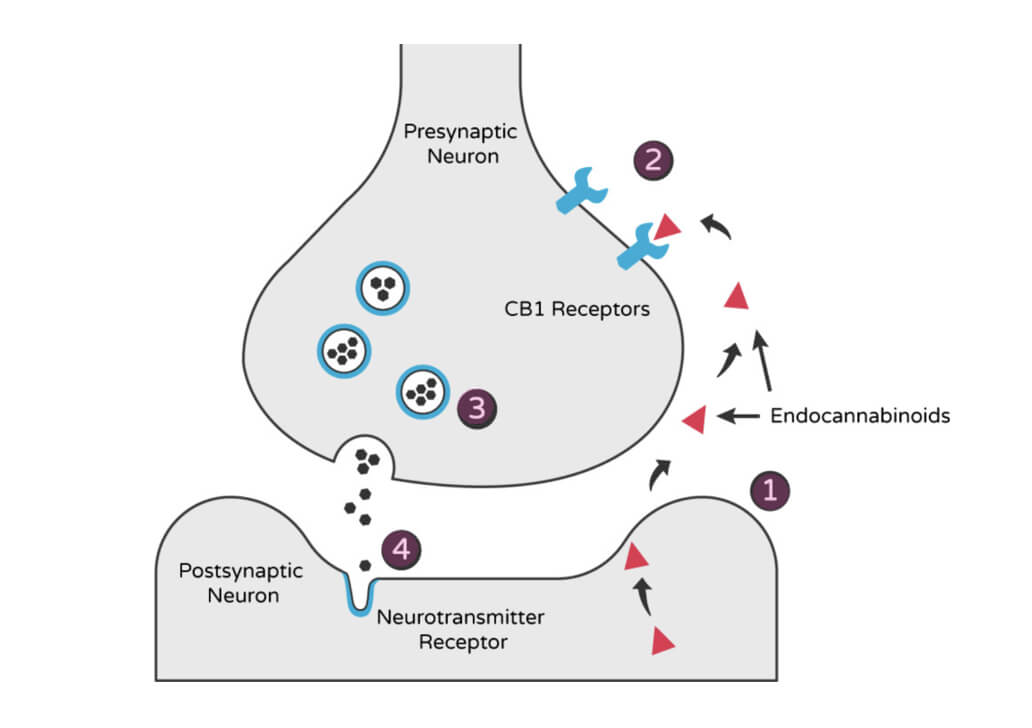 The human body also produces cannabinoids - these are called endocannabinoids.

As described above, these compounds interact with the body's endocannabinoid system and are therefore used for medical purposes.

Some cannabinoids are psychoactive, meaning that they affect the brain.
The cannabis plants used for medicinal purposes have a high concentration of the main cannabinoids, THC and CBD.

THC is one of the main compounds of cannabis. The compound is psychoactive and is known to have euphoric effects from the consumption of cannabis in large doses. THC acts as an agonist on both the CB1 and CB2 receptors.

Like THC, CBD is a cannabinoid, and the structure of these two compounds are almost identic. There is very little difference in

their molecular structure, but it is enough for CBD to have effects that are significantly different from THC. CBD acts as a

negative allosteric modulator of the CB1 receptor, but via several mechanisms it can also increase the activity of the    endocannabinoids that the body produces. CBD does not have a euphoric effect - even in large doses.

In Denmark, the use of medical cannabis is recommended for the following indications: chronic neuropathic pain, cancer pain, multiple sclerosis, spinal cord injuries with neuropathic pain and spasms and as part of palliative care.

Doctors can, however, prescribe medical cannabis to all patients in cases where it is believed to have a positive effect on the patient, regardless of indication.

There are a number of ongoing research projects investigating the potential positive effect of cannabis in patients with epilepsy, anxiety, PTSD, sleep apnea, migraines, fibromyalgia, etc.

Read more about the research

Like all other medicine, medical cannabis can also have side effects.

The risk of dependence following prolonged use of medical cannabis has not been sufficiently studied, but the experience of drug research shows that cannabis is less addictive than comparable pain medication if misused (Ref.: Anthony, JC et al. Experimental and Clinical Psychopharmacology, 2 (3), 244-268).

See a list of the potential side effects below.

Side effects from the use of medical cannabis include:

Terpenes are aromatic compounds that give the cannabis plant its fragrance and flavour, and there are several different terpenes in a single plant.

Research is being conducted on terpenes’ possible physical effect. For example, researchers are looking into whether the terpenes have an anti-inflammatory effect or possibly contribute towards modulating and supporting the efficacy of THC and CBD. The latter is also called an entourage effect.

Both the concentration and the distribution of the terpenes depend on the cannabis variant. That's why the fragrance of the different variants also varies widely.

The ingestion of medical cannabis

Medical cannabis can be consumed orally as cannabis oil - either as droplets or in the form of softgel capsules containing cannabis oil. Capsules make it easy to accurately dose the amount of THC and CBD.

Cannabis oil contains an extract from cannabis flowers, which is diluted with an oil for medical use. When ingesting medical cannabis in the form of oil and softgel capsules, the active ingredients are absorbed into the bloodstream through the small intestine.

The effect of the oil and the cannabis softgel capsules occurs after 1-3 hours and lasts for 6-8 hours.

It is not recommended to mix cannabis oil in baked goods or other food (e.g. Yogurt) as mixing can make it difficult to dose accurately.

Medical cannabis may also be inhaled as a vapour. This means that the cannabinoids are absorbed through the lungs.

For inhalation of medical cannabis, a specific inhaler is used, in which the dried cannabis flowers (either whole or ground) are placed. The flower is heated to the optimum temperature so that the cannabinoids are released in vapour form. This vapour can be inhaled and the drug is rapidly absorbed into the bloodstream via the lungs.

With inhalation, the drug works after 5-10 minutes and has a duration of action of 2-4 hours.

All medical cannabis preparations undergo a strict quality assurance programme, which is regulated and inspected by the Danish Medicines Agency. The preparations must meet requirements for product safety and uniform content with regards to the active chemical ingredients, just like all other medication. That's why each batch is tested and certified in accordance with applicable standards. To ensure uniform levels of cannabinoids, CBD and THC, cuttings from mother plants are used. The plants are also cultivated in climate controlled greenhouses with continuous growing conditions, so that the plants all have the same temperature and lighting from batch to batch. In addition there is traceability from each plant to the finished preparation. 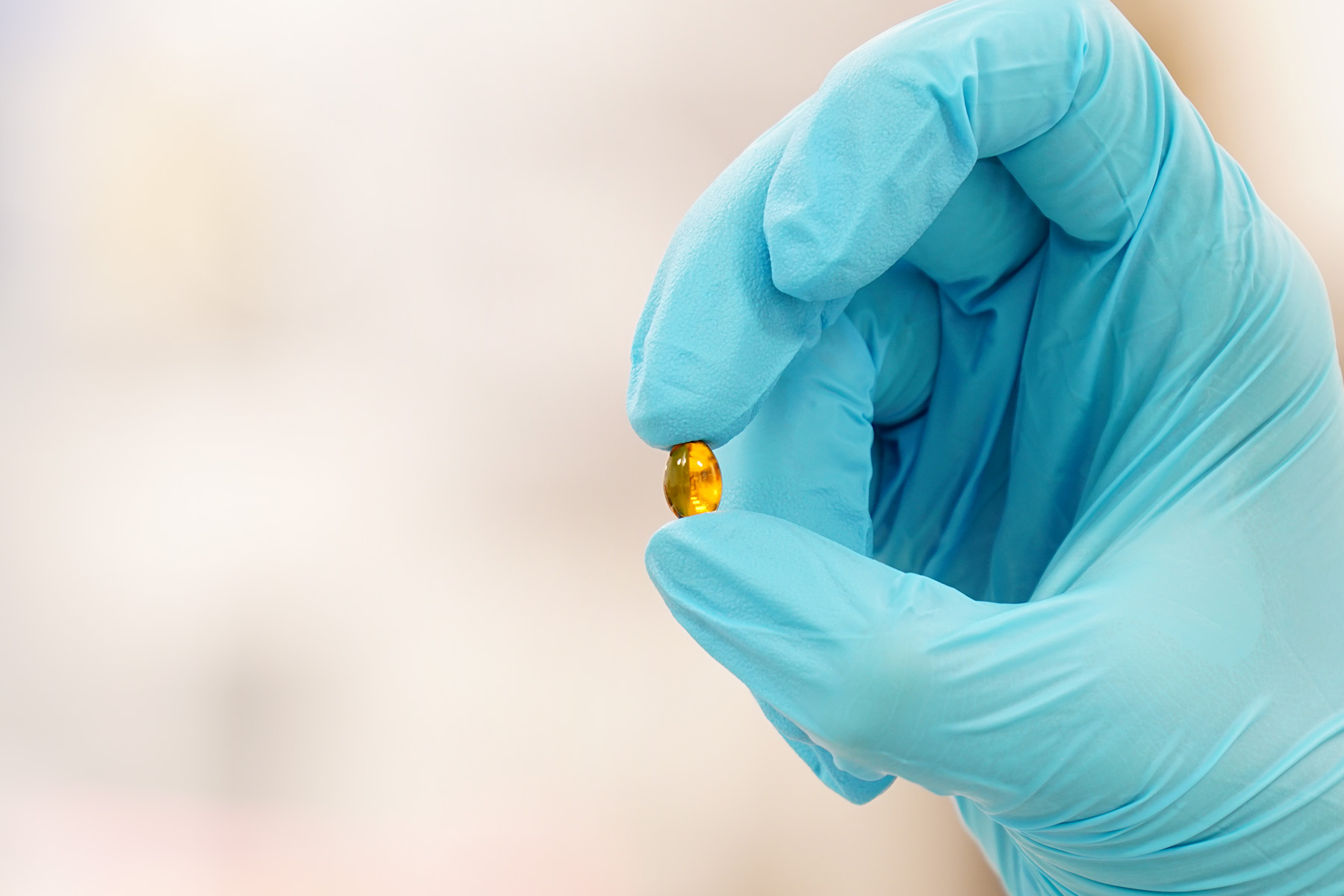 Your registration has been successful.
This website uses cookies to recognize your computer or device to give you the best user experience and to improve its features. You can disable cookies through your browser but some features of the site will no longer be available. To read our Website Privacy Statement, click here