Learn more about how Spectrum Therapeutics can help you. Please verify your age to explore the complete website. Asterisk indicates required fields.

Already a member? Log in as a patient or health care professional

You must be of legal age in accordance with the law of your province to access this website and/or purchase medical cannabis.

Thank you for visiting Spectrum Therapeutics. You need to be of legal age to enter this site.

UBC has named Dr. M-J Milloy as the inaugural Canopy Growth Professor in Cannabis Science. This professorship will lead clinical trials to explore the use of cannabis for substance use disorders and related conditions, including exploring the role cannabis can play in helping people with opioid use disorder stay on their treatment plan.

“The therapeutic benefits of cannabis are only just beginning to be understood,” Milloy said. “Early research has shown that it could have a stabilizing impact for people with opioid use disorder, improving their quality of life and offering a pathway to long-term treatment solutions. In the midst of an overdose crisis, we have a scientific imperative to build upon this research.”

Canada is experiencing an unprecedented public health emergency, with deaths from opioid overdoses now far exceeding the number of lives claimed by all other types of accidental death, including motor vehicle accidents. In the first nine months of 2018, an estimated 1,143 British Columbians died of a suspected opioid overdose. In response, the province declared a public health emergency and invested $500,000 in the British Columbia Centre on Substance Use (BCCSU) in support of research leading to solutions to the overdose crisis.

"There’s a clear need for significant resources and innovative collaborative leadership from industry, government, and academia to address the overdose crisis which continues to have a devastating impact on families and communities across Canada,” said Dr. Mark Ware, Chief Medical Officer, Canopy Growth. “Today, we acknowledge the lived experience of those affected and proudly support this significant step in building a legacy of medical cannabis research with a goal to positively impact those living with substance use disorders around the world. Dr. Milloy is a passionate, dedicated scientist who focuses on research that has a real-world impact, and we are thrilled UBC has selected him as the Canopy Growth Professor in Cannabis Science.”

In June, Canopy Growth announced it would contribute $2.5 million to the University of British Columbia (UBC) and the BCCSU to establish a professorship and create an enduring legacy of research through the Canopy Growth Cannabis Science Endowment Fund. 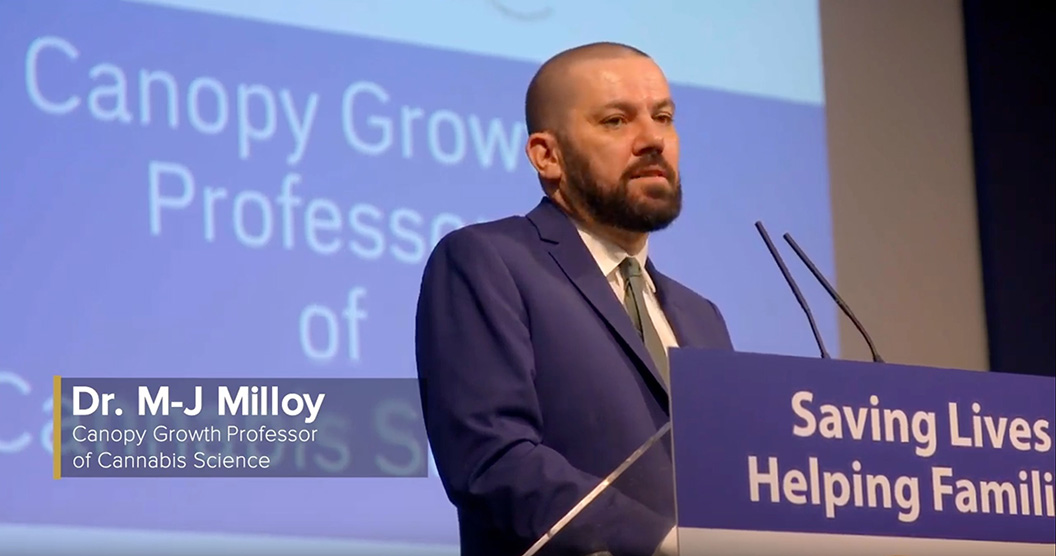 Dr. Milloy is an epidemiologist at the BCCSU. His research has focused on the relationship between illicit drugs and HIV, as well as the public health impact of cannabis regulation and the medical application of cannabis and cannabinoids, especially for people living with HIV or substance use disorders.

As the Canopy Growth Professor of Cannabis Science, Dr. Milloy’s research will primarily focus on addressing the urgent need to better engage and retain people with opioid use disorders in clinical care. Fewer than one-third of people who start opioid agonist therapy with methadone or buprenorphine/naloxone remain in treatment after 6 months. Dropping out of addiction treatment is a serious risk factor for overdose death. Findings from upcoming clinical trials could help identify ways to better support people with opioid use disorder using cannabis-based therapy.

Dr. Milloy’s research will also contribute to an emerging body of evidence that suggests that cannabis can have beneficial impacts on the health and well-being of people with opioid use disorder.

Recent research from Dr. Milloy includes studies that have found:

These findings add to the growing evidence that supports a role for cannabis and cannabinoids in the clinical care of people with substance use disorders. As a result of the new Canopy Growth Professorship in Cannabis Science and Endowment Fund, this will now be further studied.

Your registration has been successful.
This website uses cookies to recognize your computer or device to give you the best user experience and to improve its features. You can disable cookies through your browser but some features of the site will no longer be available. Read our Website Privacy Statement